All tracks written and performed by Chris Flegg

This album is a collection of twenty of my compositions for solo acoustic guitar, some of which have been previously released on various albums and here given a fresh interpretation, and some of which are presented for the first time. All tracks were recorded in standard tuning using a Martin OMC-41 Richie Sambora Signature Model guitar.
Market Street Rag is an energetic tune with a classic rag time feel, pitched in the key of F and punctuated with flourishes of diminished chords. Watch out for the tricky ending which borrows a phrase from an earlier composition, Cat House, included in this album at track 18.
Gazing At The Stars All Night existed as an instrumental before lyrics were added for the title track of a previous album. Here it is played in its original form except for a new introduction. I like to start acoustic guitar sessions with this tune as I feel it has a sort of enticing quality that holds the attention of the listener.
Her Favourite Flower is an old favourite dating from about 1970 and was inspired by listening to a solo improvisation recorded by Django Reinhardt, though musically the only similarity is the use of three note chords to carry the melody against a steady bass line, a style which I have often used in compositions. This tune featured on an earlier album of the same name and here gets a bright new interpretation.
Chasing Cuckoos was originally two tunes, one featuring the device of harmonics to sound like a cuckoo and the second being almost in ragtime. Somehow the second of these tunes became incorporated as a middle section to the first.
The Day That We Planted The Apple Tree originated from an improvisation while busking and was later made into a song of the same name. Here in its original form, it is slightly more up tempo than in the vocal version but every bit as charming.
Special July Delivery is a slow, almost moody tune with jazzy chording which brings out the beautiful rich tone of the Martin guitar in the lower register. After stating the theme, there is an improvised half chorus which maintains the relaxed feel of the piece.
Just An Idea Away is a happy sounding fingerpicking tune which was written in 2020 just after a long drive going on holiday, the main theme just happened while practicing and luckily was captured on a phone to be finished later. This tune is dedicated to George.
Mary’s Tune has a relaxing melody in which the first part of the theme is initially stated in the same folky style as Gazing At The Stars All Night but is restated using jazzy chording. It’s just for you, Mary Lou.
All You Need Is Time was previously recorded in a jazz quartet setting for my album Moving On but here is presented as a guitar solo and with a new improvised chorus.
Don’t Leave Until The Party’s Over echoes the music of the 1930’s and 40’s in its structure and melody, the finger picking style making it sound somewhere between Chet Atkins and Fats Waller perhaps?
Now That The Day Is Done is a simple tune which, in common with tracks 2 and 5, has a theme which is played by picking first and third strings together, against a bass line. It is inspired by the idea of relaxing with a guitar at the end of the day.
Waiting for Michael takes its title from the time when it was written in the weeks leading up to the birth of my youngest son, Michael. There is some jazzy sounding chord work in this piece. I like the unusual structure of the tune, there is a main theme which is the key of in F, followed by a second quite different theme in the key of D and then a repeat of the main theme.
Beach Holiday 2020 is a cheerful tune that might easily be mistaken for 1970’s pop. It is fun to play and is a real foot-tapper.
I’m Going Home has a bossa nova flavour and has been previously released as a vocal.
Slow Train was featured on my jazz album, Moving On, and is here given a new interpretation with some interesting chord work in the improvised section.
Waltzing In The Rain is a slow, calming waltz which in parts sounds almost classical. I think it is distinctive in the way the tune is played using broken chords, or arpeggios, in which in most bars the melody precedes the bass line.
Old Soldiers has been previously released as an instrumental and also as a vocal, and has even been arranged for brass band. This version is brighter in both tempo and mood than previous versions.
Cat House is a new version of a tune first recorded for the My Green Guitar album and includes a new improvised chord solo.
Not One Of buddy’s Habits is taken from the Moving On album and given a solo guitar treatment with new chord work in the improvised variation. The ending is worthy of a smile.
Twenty’s Plenty is characterized by the use of separate chords for each melody note which makes for some nifty chord work in places. The tune is so named because the first performance earned a £20 tip! In an album having twenty tracks, it also makes an appropriate album title and a natural choice to be track 20.

A very clean album of solo acoustic guitar compositions by this experienced English musician, Twenty's Plenty is another of those silver linings from the massive grey cloud of COVID. Ranging from folk to jazz, passing through ragtime and stopping for lunch at easy listening, this album is smooth enough for background music yet smart enough to reward the more attentive fan.

Flegg took advantage of enforced downtime to revisit pieces from his multiple previous recordings, rearranging ensemble tracks for solo guitar, reworking songs as instrumentals, creating or reimagining each number.
A score of tracks is quite a handful to review - four handfuls in fact - but there were clear favourites for me.

Market Street Rag opens in impressive upbeat style, a catchy melody which could well have served as a TV theme tune in my day, a backhanded compliment perhaps but certainly an earworm. Chasing Cuckoos with its clever hooks reminds me of John James. The Day That We Planted the Apple Tree presents another great melody line, singable this time, as does the swing-time Don't Leave Until the Party's Over.

Things get a bit Latin on I'm Going Home and Slow Train, touches of rumba and fado above the bossa nova rhythm. Cat House brings out the jazz in Chris' guitar, somewhere between Manouche and Mississippi delta blues.

There are more easy-going tracks, and new compositions including the improbably named Beach Holiday 2020. We're firmly in 4/4 throughout, unlike most folk albums these days: Waltzing in the Rain is the only exception.

Based in St. Albans not far to the north of London, guitarist Chris Flegg draws on his many years of experience in the folk and jazz worlds for these twenty immaculately recorded instrumental tracks, played on solo acoustic guitar and laid down in 2020.

The title track even earned Chris a twenty-dollar tip on its first live outing. It is easy to understand that punter's enthusiasm.

Chris is a deceptively relaxed, accomplished player and his compositions are readily accessible, whether they are the classic ragtime guitar stylings of the opening 'Market Street Rag', the beautiful mood music of 'Gazing At The Stars All Night', jazz-inflected 'Special July Delivery', happy-go-lucky vintage pop-styled 'Don't Leave Until The Party's Over' or the cool bossa-nova of 'I'm Going Home', to name only a few.

If you are looking for virtuoso guitar playing or just something rather relaxed to chill with, Twenty's Plenty does hit the spot.

"The CD of the week is Twenty's Plenty by Chris Flegg  - such an accomplished guitarist across a range of styles."

Roger Williams   "A World of Difference"

Chris Flegg is a singer, guitarist and songwriter from St Albans but I won’t hold that against him. Twenty’s Plenty is a collection of twenty guitar instrumentals, some of which have appeared before and some of which have had words attached.

For the afficionados, Chris plays a Martin OMC-41 in standard tuning in playing these new versions, some of which originally date back to the 1970s. Doubtless experience and better technology have played a hand here.

The opener, ‘Market Street Rag’, is a bright way to start off, the standard ragtime feel being interrupted by patterns of descending chords.

Both ‘Gazing At The Stars All Night’ and ‘Her Favourite Flower’ were title tracks from earlier albums – Chris has made a lot of recordssimple theme with cuckoo calls played on harmonics; one for the playlists, I think.

‘The Day That We Planted The Apple Tree’ is another tune that became a song, it’s origin being a busking improvisation but the rest of the tracks were,

breaks the pattern by formerly being a song as does ‘Old Soldiers’ but all the tracks have been reworked and reinterpreted for this album.An unbroken sequence of twenty instrumentals on just one solo instrument could get a bit samey but Chris avoids that by mixing styles and not letting any one tune outstay its welcome.

With summer coming and the chance to mingle outdoors (perhaps) Twenty’s Plenty could be an album for your barbecue or picnic. 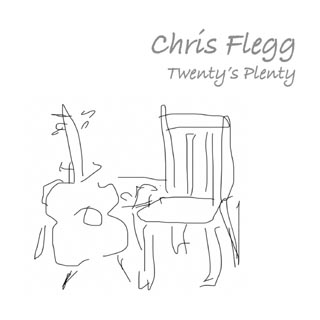 Gazing At The Stars All Night