All songs written and arranged by Chris Flegg.

The Spirit Of Django Lives tells the life story of Django Reinhardt, the great Belgian gypsy guitarist, who has had a huge influence on jazz guitar playing since his rise to fame in the late 1930’s. The song tells the story of how he was trapped in a caravan fire and his left hand shrivelled and burned, but how he still went on against all the odds to be a successful jazz guitarist, notably with the Quintet of the Hot Club of France. Not surprisingly, the instrumentation is guitar driven and this arrangement has some nice guitar riffs and a dramatic chord ending, but no attempt is made to recreate the individual guitar sound and style of the great Django; there are plenty of his recordings out there for you to still hear the real thing.

Gerald is a charming little piece about two people who have frequented a park together but now only one of them turns up and talks instead to Gerald. Time passes and finally the truth is revealed.

The Raggedy Doll and the Teddy Bear came into existence with the intention of having a children’s song that would be fun to do when busking. When you have played the Teddy Bear’s Picnic five times, you wish you knew an alternative, so here is a song about toys that put on their dancing shoes and go dancing at night. How exciting can it get you are thinking? There are some fun rhythms on this number, a real foot tapper, and listen for John Bridge doing a teddy growl on trombone!

Forever Land captures the belief that most people seem to intuitively feel, that we are eventually reunited with those we have lost and that there is a better place waiting for us all, regardless of faith or creed. This is not about religion, unless you want it to be.

Beginnings And Endings tells a tale of a couple for whom a meeting in a gallery turns into a relationship which cannot last but, as the song says, beginnings are easy, it’s harder to end. That’s life though folks, ultimately we all move on to begin and renew, and life is full of beginnings and endings, hellos and goodbyes.

T-Rex Would Still Be Here is about as silly as it gets, the idea that global warming made dinosaurs extinct and that they would still be here if they had worked together to combat climate change. But then dinosaurs were stubborn reptiles, not like us? This song is given a jazz band setting featuring Terry Ede on clarinet and John Bridge on trombone, with legendary jazz bassist Harvey Weston bringing a relaxed jazz swing to the rhythm section.

Time Precious Time, the title track for the album, is about time in general, with observations on how time is always just slipping away, unstoppable and uncatchable since, just when you think “now” has arrived, it is gone in an instant. Most of the usual clichés are here, such as “time marches on”, and there is a nod in the direction of the biblical reference to time in Ecclesiastes 3:2, “a time to sow, a time to reap”. The idea is to look at growing older positively, “fresh from the vine, aging into a mellowing wine”. The song has a calm and measured feel with a tantalising chord progression which never quite resolves in the way it should. Watch out for the guitar harmonics at the ending which chime the hour and finally call time.

Across The Wasteland has a thought provoking lyric about warfare, taking the view that our soldiers do a professional job in the most difficult circumstances but ultimately the price of winning is sometimes a country reduced to wasted land. With so much destroyed, what kind of victory is that? The harmonica has been the soldier’s musical friend, certainly since the days of the First World War trenches, so it was a natural choice to add harmonica in the musical setting of this song and Steve Lockwood plays it perfectly to create a haunting backdrop. Rod Brown adds a dramatic military snare drum in the closing chorus.

Times Square is about that aspect of human nature that makes us want more than we have, the song taking the example of a poor African boy who dreams of a sunshine life, free from deprivation. The boy grows up, moves to the city and gets all he ever dreamt of, but will contentment last? We all have a tendency to look at things we don’t have, rather than appreciating things we already have, and the story line in this song says it all.

There’s No Escape The Daily Grind reverts to folk roots with a work song. There is a tradition of song in the work environment, from sea shanties to the songs of labourers in the fields, factories and mines. As the song says, pity those who work in silence.

It Was Love At First Sight is about a woman whose memory is lost, an increasingly common outcome in old age it seems, but every time her husband visits her she falls in love all over again; an optimistic but poignant thought.

Mean Old Daddy could not be more different, it’s a real old fashioned rag time blues with a stomping guitar and wailing blues harp from Steve Lockwood, aiming for a sort of Sonny Terry meets Big Bill Broonzy sound. The lyric on this track adapts a good few clichés from classic blues songs but adds a few nice twists. It’s not as rude as the live version though!

Chris is a fine guitar player with styles ranging from classical to blues and jazz,and a very relaxed singing voice. On this, his 8th album, he has 8 othermusicians - 5 more than on his 2008 CD "The Sound of Life". Chris's simple themes and conversational lyrics are very easy on the ear, with no hint of anger, despite some serious topics. For instance, "Wasteland", about the destruction of warsfrom the Great War to Afghanistan, is a simple statement of fact.

There are some clever and touching ideas, such as "Love at First Sight", in which, due to memory loss, a man's wife of 35 years meets him as if for the first time whenever he visits her in care.

"Gerald" is a sweet song with a good tune,although the explanation of who Gerald is, is unnecessary, as it becomes obvious.

You could either love or hate "Forever Land", about meetuing loved ones again in Heaven, but it is curiously spiritual, even anthemic, without being overtly religious.

Writing a good children's song is difficult, but "The Raggedy Doll and the Teddy Bear"is catchy and great fun, with its "La Bamba" style rhythms.

The closing "Mean Old Daddy" is a superbly played collection of blues clichés, ably enhanced by Steve Lockwood's harp playing. I wish Chris had included more in this style, at which he clearly excels.

Time Precious Time
When you strip away the hype and nonsense that is the currency of so much music today, whatever the genre, it's about the songs. And if the songs are good enough, they will sing louder and stand prouder than all of the bluster the marketting men muster. Songs that weave their way into your heart and your soul. Songs with linear narratives. Bloody good songs.

Time Precious Time is Chris Flegg's eighth album since, as a physics student at London's Imperial College, he became involved with the folk club on campus and began writing. And his compositional breadth is immense, as illustrated by the Django Reinhard paean "The Spirit Of Django Lives", a ditty about dinosaurs ("T-Rex Would Still Be Here"), the standard folk anti-war tract ("Across The Wasteland"), and the afterlife ("Forever Land"). And I haven't even mentioned "Gerald", "The Raggedy Doll And The Teddy Bear" or "Times Square".

Flegg's playing throughout is, like his vocal delivery, a model of restrained majesty.

This is a straightforward folk album from a man with nothing to prove. Chris Flegg has been performing on the folk circuit since he started playing in the famousTroubadour Folk Club in London, having moved to the capital to study physics at Imperial College in South Kensington. The guitar work is lovely, the songs thoughtful and the production sensitive. This is the fourth album of original songs from the St Albans based singer/songwriter and I really liked it. The pick of the songs for me is Wasteland which points out that sometimes the price of winning is simply the remains of a country reduced to wasted land.
"Across the wasteland, we fight our way
We stumble by night, we crawl by day
Bayonet and bullet, fighting hand to hand
To raise the flag on wasted land".

War mongering politicians should be made to listen to this song. 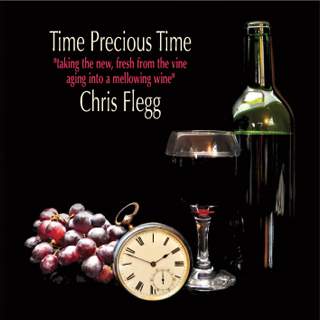 
The Sprit Of Django Lives

T-Rex Would Still Be Here

It Was Love At First Sight

Update Required To play the media you will need to either update your browser to a recent version or update your Flash plugin.
You must install Adobe Flash to view this content.