The Album "Through the window" is still available. Here is the blurb from the CD booklet explaining the songs;

Well here it is, my 2006 album following on from the 2005 album My Sweet Lady and there are 15 original songs and one new instrumental tune crammed into one CD to give over one hour of music. As before, the setting of the songs is deliberately simple to give the feel of live performances, but as this is such a long album, I have allowed myself a little more leeway in overdubbing. My soprano sax playing adds colour to tracks 4, 10 and 14 and my tenor sax appears for the first time on track 6.

Commuter Breakdown Blues is about the typical commuter's fantasy of escaping the tedium of taking the train to work. Imagine one morning giving up waiting for the train, just walking off the platform and sitting in the park all day? We can all dream.

Saturday Morning In The Charity Shop paints an image of a typical charity shop, where else can you buy a Charles and Diana memorial plate, and interweaves a story behind a man bringing in a pile of clothes. In the midst of bustle there is a hidden sadness.

Creatures Apart is a quirky sort of love song for a couple who seem not to be alike, but on reflection must have something in common.

Another Child In Africa is a serious song about how we come to terms with the plight of children dying in Africa, whether from disease or hunger, and how our own daily problems can be suddenly put into perspective when confronted with the image of a dying child. At best, most of us make some donation and just get back to our own busy lives, but the problem does not go away, nor does our feeling of guilt.

Where do Buskers Go When It's Raining was written to commemorate a holiday spent busking with John Breeze at Padstow, hence the two guitar arrangement and harmony vocal on the last chorus. There is also a reference to Breezie in the first verse, how did that get there?

The Cool Frog is a song about that proverbial kiss between princess and frog, with the frog in this case being a super cool sax player. In live performance, the audience provides a chorus of "rivet"; OK so you have to be there, but it's fun, honest.

My Song Is Just A Window To My Heart has a gentle Country feel, in both style and sentiment. It reflects the contradiction that for commercial success as a Country singer you have to sound sincere about not being commercial, or in other words my songs are from the heart but I still want you to buy my CDs.

The Mermaid Of Zennor is a ballad telling of a typical encounter between a mermaid and young sailor, although perhaps a little more contemporary and practical than most traditional accounts. The mermaid carving on a wooden pew in the village church at Zennor on the North coast of Cornwall inspired this version.

Through The Window is an atmospheric piece with three alternating guitar patterns, played plectrum style then finger style, with lyrics about how it feels to play guitar. I often describe it as an instrumental, but with words! There is a simple pleasure in routine music practice which is hard to describe, this song tries to do just that. The line "through the window life goes on" moved me to names the album after this track.

Don't Fuss About Me When I'm Gone is from the viewpoint of planning your own funeral to cause minimal fuss, or maybe the opposite. The final verse switches to the reality of caring for who you leave behind, before lapsing into a less than serious ending.

It's A Cat's life tells it like it is; all cat owners will relate to this catalogue of how cat's can run your life. The cat on the CD cover is Max who is the most vociferous, persistent attention seeking, fridge emptying and affectionate cat ever.

The Ballad Of Joseph And Mary was written for a Christmas gig at Herga Folk Club. How could sweet innocent Mary awake to find in her arms a newborn baby, heaven sent. This ballad tells of one way it could happen, but how unlikely is it, and how even more unlikely is the biblical version? This is all food for thought without intending to challenge anyone's beliefs in whatever they chose to believe.

The Fairest Flower is a social comment on man's exploitation of the planet at the expense of all other life, and the irony of destruction being done in the name of progress. It is not just the destruction of rainforest or the poaching of tigers that should concern us; on our own doorstep we take another step towards destroying nature every time we extend a runway, build on green belt land or lay new roads. Just a thought.

The Long Winding Highway is an instrumental for soprano sax, rhythm guitar and lead guitar which I recorded by multi-tracking.

Guy Fawkes has a strong message about the way the "war on terror" is apparently using secret prisons and renditions to avoid the issue of human rights for terror suspects and draws a parallel with the barbaric treatment given to that most famous of would be bombers, Guy Fawkes.

Eurobabble is about the downside of being in Europe and was inspired by a chance meeting with a Cornish fisherman who lost his livelihood along with so many other with the demise of English fishing now that we are in Europe; the chorus has a true Euro flavour, composed in four languages to meet the requirements of a supposed new European song writing Regulation. Everything touched by Euro Regulation seems to go strangely wrong; it is therefore inevitable that this song should have a weird chorus.

I hope that in these songs leave you feeling good and that you find reason to think about some issues from a new perspective, with some smiles along the way.

Through the Window - Review by Unicorn Magazine

This is Chris's 4th CD. All the songs are self-penned, with superb guitar playing throughout, in a mixture of styles blues, finger-picking, and plectrum. Double tracking with his own excellent playing of soprano and tenor saxophones could be viewed at self-indulgent, but it works well. The songs, in the main, are light-hearted, leavened with the occasional thought-provoking track, and Chris's voice is practiced and mellow. There are 16 tracks totaling over an hour, with only one instrumental 'The Long Winding Highway' - again multi-tracked with lead and rhythm guitar and soprano sax mixed to good effect. This track was one of my favourites; others were 'It's a cat's life' and 'Through the Window' - which Chris calls ' an instrumental but with words!' Personally I could have listened to more of the guitar and sax playing and fewer songs, but that's because I'm very envious of his playing! ' Some of the songs are probably better in a live situation (...The Cool Frog...the audience provides a chorus of 'rivet'...), but others may well stand the test of time. As a resident of Windward Folk Club, St. Albans, he is worth a visit to find out. 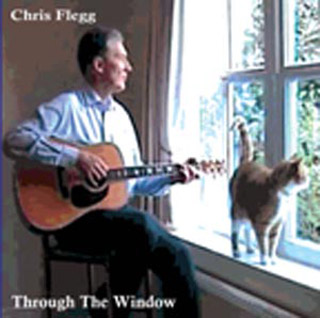 Through The Window CD

Another Child In Africa