The sound of life

This album is full of original songs, mostly written in 2007. As with previous albums, it is entirely acoustic. Some tracks have just guitar and vocals but I am joined on others by some fine musicians.

Keith Kendrick, ace concertina player from Derbyshire, plays both Anglo and English concertina and is featured on "A song of peace" and "Old Ben" to bring a real sense of the folk tradition to these songs.

Terry Ede, better known to many for his virtuoso tenor sax playing, plays some exciting flute backing on "She got on the train at Cricklewood", and a simple and effective flute part in "The flowers of England".

Rod Brown adds percussion wherever needed on the album. You may remember Rod's great playing from my jazz album, "Moving on".

The Troubadour Café is about the Troubadour Folk Club which was a favourite of mine when I lived in London in the 70's. Redd Sullivan and Martin Winsor ran the club in the tiny basement of the coffee bar. This was a late night club which not only had excellent guest singers but attracted all sorts of performers who would turn up after their own gigs had finished. The song mentions Martin's trumpet sound which was an amazing trick he had of using his voice to sound like a trumpet, as in their version of "I wish that I could shimmy like my sister Kate".

I'm not crazy yet is about the things we do to remember, like buying a rose for someone who will never get to see it. It makes us feel better, but in some ways it's a strange thing to do. This song came to me after I bought a rose on the birthday of my late wife, Shirley.

There's a sound is an atmospheric song based loosely on the idea that we all hear and remember sounds that characterise critical moments in our lives. This is a strangely emotional song to sing and it seems to communicate some feelings we all share about life in general. The album takes it's name from a line in this song, "It's the sound of life".

She got on the train at Cricklewood is a simple story about me meeting a girl on a train, changing a drab, routine journey into something special and exciting; it is about time someone wrote about Cricklewood. As the song says, "hooray for Cricklewood".

Old Ben has to be my favourite song on this album, about an old dog I met in Wales, a retired sheep dog who lay around the place sleeping and only really getting excited when a herd of sheep was driven down the lane to the next field. Getting old is something we all think about from time to time; will you miss your working days?

Prelude to autumn is an instrumental piece for soprano sax and guitar. Unusually, the sax plays the tune unaccompanied, followed by a guitar solo, and then the two combine to finish with a variation.

A song of peace is for mothers everywhere who have sons who would be soldiers. There will always be room for one more song of peace, but to me the words to this song say it all, there is nothing I can add.

The flowers of England was written with the folk club audience in mind, with a not too tricky chorus and a theme which goes to heart of what people love about the English countryside. My selection of favourite flowers reminds me of my grandmother's garden and the banks of primroses along the nearby railway.

A boy and his kite is about the things that tie us down, hold us back, and at the same time keep us going; a kite longs to be free of the line that holds it to the boy on a hill, but when the line breaks it can no longer fly without crashing, despite being free at last.

If I were happy is a whimsical song about being happy; you cannot expect to be continuously happy and sane at the same time; the trick is to understand what happiness is, to value those happy moments and know how to laugh at adversity.

Autumn lament is based on the same tune as "Prelude to autumn" with words that try to capture the spirit of autumn from a new perspective. Watch out for the sound of the cuckoo in guitar harmonics!

I knew a girl she was so thin is a deliberately superficial look at the perils of wanting to be like a size zero model, inspired by a recent attempt in the tabloid press to blame eating disorders on the fashion industry, and has a story line best described as being very silly.

Chris Flegg - The Sound Of Life

"St Albans singer songwriter Chris Flegg is a superb guitarist and composer able to use a variety of styles from classical to blues and jazz, complemented by a pleasantly relaxed singing voice. I particularly enjoyed If I Were Happy for its jazz influences and the bluesy Singing My Life Away. The ideas behind these and others such as There's A Sound, are simple but effective. At times nostalgic, even overtly sentimental, the simplicity of Chris's themes, and conversational lyrics, took a while to appreciate. My two favourites have to be I'm Not Crazy Yet, in memory of his late wife - a superb and memorable song; and I Knew A Girl She Was So Thin, a brilliantly played satire on the size zero scandal. I found some of Chris's words and symbolism a little twee, but taste is a fickle thing. His Song Of Peace, for instance, is to me rather naive; and his Flowers Of England, which I expected to be an anti-war song, is simply a better researched reworking of English Country Garden. There is a refreshing absence of anger in these songs, a gentler touch that does not challenge or assault the listener. Less protest, more persuasion. Sparingly assisted by Keith Kendrick on concertina, Terry Ede on flute and Rod Brown on percussion, Chris's deceptively easy style ultimately makes for a very enjoyable listening experience."

Chris Flegg - The Sound Of Life (Own Label)

St. Albans-based Chris may not be a household name to folkies, but he's been involved in the folk scene on and off since his student days in London in the early 70s, shortly after which time he worked with many jazz lineups in the early days (including gigs with Steve Benbow and Diz Disley). Not counting an earlier retrospective collection, The Sound Of Life is Chris's third album of his own songs; it's the most focused and possibly the most consistently accessible thus far, containing arguably some of his most memorable songs to date. (Anthony John Clarke has already covered one of Chris's earlier songs, so fear not - word is getting round!...) Chris's style is deceptively easy on the ear, embracing a facility for melodic invention that at times recalls Ralph McTell, so it's no surprise that his songs concern the simpler truths arising from reflecting on real aspects of his life like the ostensibly strange things he does to remember his late wife, his memories of great evenings at London's Troubadour Club, and the dubious pleasures of daily commuting on Thameslink into London. Chris's songs are charming in nature and, though generally life-affirming, aren't complacent or smug; his observations are gentle rather than deep or cutting commentaries, but none the worse for that. There are occasions (eg There's A Sound) when the philosophical content is a tad underdeveloped, but this isn't a serious distraction and for the most part Chris's lyrics satisfy with their straightforward premises. Sure, Chris pokes genial and superficial fun at times too, but he also displays genuine affection for his subjects amidst all the whimsicality. There's also a very pleasing folk-friendliness about Chris's songs, and I can foresee The Flowers Of England, A Song For Peace and Old Ben being eagerly taken up by performers in that sphere. Chris's prowess on guitar is unquestionable, and he augments his delightful picking with some mellifluous soprano sax, while he also enlists Keith Kendrick (concertinas), Terry Ede (flute) and Rod Brown (percussion) to flesh out a couple of tracks apiece. This is an attractive and admirably modest collection, faithfully recorded. www.chris-flegg.demon.co.uk

Also reviewed in Scotland on Sunday

"These songs are all his own, accompanied by his stylish, varied and skilled acoustic guitar. Unashamedly English in songs of native primrose, poppy and bluebell, or metropolitan in 'She Got On The Train At Cricklewood,' the songs are well worth a listen."

Chris Flegg is one of those stalwarts of the folk scene who find their groove and soldier on, writing songs, playing to small appreciative audiences, and being very happy with that, thank you. The Sound Of Life is a pleasingly gentle, almost naive set of self penned songs, quite reminiscent of Ralph McTell. It's dominated by heartfelt reminiscences and songs about growing old, but there are some lovely touches of humour and bluesy moments from Flegg's very impressive guitar. All in all, this is a low-key pleasure to listen to.

Chris Flegg is a self-taught folk and jazz musician from the St. Albans region of London, and he wrote all 13 tracks on this beautifully simple album.

"Troubadour Cafe" sets the scene as he sings about an actual folk-scene hot spot and recounts many of the familiar names of that scene from a few decades ago. Lost love is recounted in the haunting "I'm Not Crazy Yet" with a lovely facility with words and a typically simple backing.

"Old Ben" takes Flegg from the more familiar city-folk scene into a rural tale about an old dog. The musical backing steals in regularly to transport us to an era of traditional folk. The more familiar folk music of the idealistic 1960s is recalled on the anti-war song "A Song of Peace."

We get a walk in the fresh air and bit of botanical knowledge on the delightful "Flowers of England." The album closes with an intriguingly titled song called "I Knew a Girl She was So Thin." This brings us that other strand of folk music -- the humorous song -- delivered in a perky style, but with just perhaps a hint of a hidden message.

Flegg is an excellent writer and performer -- he serves double duty on guitars and soprano sax -- with a repertoire that is fresh and thought-provoking. What more do you need? Buy it and encourage good writing. 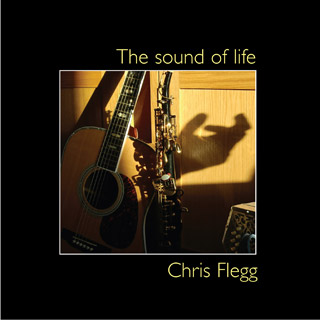 The Sound of Life

I'm Not Crazy Yet

The flowers of England

You can also buy individual tracks or the whole album as downloads from iTunes.