The album "My Sweet Lady" includes the following tracks;

My sweet lady is just a simple love song, with the thought that somehow you can feel the presence of a loved one when apart.

The Swing tells the true story of how a little girl is taken by her mother, supposedly for a day trip to the sea, only to suddenly find herself left in a children's home where she is left for two years. This happened to my late wife, Shirley, who always remained troubled by this childhood experience.

A field of daffodils is a gentle song about a hillside near Chysauster, overlooking St Michael's Mount in Cornwall, where I scattered Shirley's ashes.

The Princess And the Huntsman is a fun song about a princess who, of course, loses her clothes in the first verse. If it has a meaning, it is about the chaotic way our lives progress and how life's choices are largely dictated by circumstance; we never really get to choose. This is the only song in which there is any multi-tracking trickery, since I play soprano sax as an accompaniment.

A Hill So High was written for the 2005 Maidenhead Folk Song Competition, winning second place, and is about the Long Man at Wilmington. This Iron Age hill figure of a man is still something of a mystery; why was it drawn and how has it survived 2000 years?

I Thought I Heard Your Call is based on a dream which haunted me for many years and which seemed to be a premonition.

I Shall Think of You is a song about a garden and how it will always remind you of the person who created it.

Poor Old Soldier is about my father who, following a series of strokes, can no longer speak; some old photos came to light that raise questions he can no longer answer, especially a photo of him holding a guitar; we never knew he played.

Colours of the rainbow is about how your perception of life is largely a matter of choice; if your glass is half empty does that mean someone has been drinking your beer?

Thing Just Might Not Get Better is a light hearted look at how you should deal with a run of bad luck. This song has been taken up by Liverpool based Anthony John Clarke and is expected to feature his latest CD planned for late 2005.

All of these songs are newly written, following my renewed interest in folk clubs. Special thanks go to John Breeze and all at the Windward Folk Club, St Albans, without whom none of these songs would have been written.

Chris has been involved in the folk scene on and off since the early 70s, but until fairly recently he'd tended to gravitate more towards jazz, playing guitar in a variety of band formats (from Hot Club to mainstream and latterly mellow). His move to St. Albans in 2001 was the catalyst for getting back into song writing after a 20-year break, and he currently enjoys fellow-residency at the city's Windward Folk Club with George Papavgeris.

My Sweet Lady contrasts with Chris's jazz-oriented CD Moving On (2001), and follows the 2004 Solo retrospective with a brand-new collection of original songs on which Chris accompanies himself on just guitar (with a multitracked soprano sax on one track), deliberately so that it comes closest to the sound of his live performance. And what a gorgeous sound - and a faithful recording if ever there was one.
Chris's songs are charming and accessible, simple expressions of simple truths and predominantly gentle subjects, and his unadorned accompaniments are a model of restraint: so much so that you may not immediately notice the incredibly high level of unassuming musicianship with which these accompaniments are carried off. At least part of this "immaculate deception" is probably due to the predominantly mellow nature of Chris's singing, and the naturally laid-back nature of his melodic lines. I don't intend any negative comment when I say that Chris's songs make for undemanding listening; I just mean that they flow easily and effortlessly on the ear and don't shout or hector.

Mirroring the musical settings, there's no attention-grabbing clever-dick wordsmithery here, just plain old-fashioned craftsmanship in expressing, in admirably uncomplicated imagery, personal perceptions, thoughts and experiences that can be viewed as universal. A Hill So High, concerning the Long Man of Wilmington, shows a well-developed sense of folk-history which could well have come from a lost Ashley Hutchings or early Steve Knightley project. I Thought I Heard Your Call, after a neat guitar prelude, becomes a haunting acappella song based on a dream-premonition.

The Colours Of The Rainbow is one of two songs to deal with the recurring theme of life's choices (although I'm not convinced by the acceleration of tempo as the song progresses); the other is the fable of The Princess And The Huntsman, which is reminiscent of early Jonathan Kelly. The Swing brings a particular poignancy in that the events Chris recounts actually happened to his late wife Shirley (to whose memory the CD is lovingly dedicated), while the affectionate I Shall Think Of You brings those mellow-jazz influences to the fore again.

The CD's "light relief" comes on the tongue-in-cheek Things Just Might Not Get Better, which has already been snapped up by Anthony John Clarke! (Contact: www.chris-flegg@demon.co.uk.) 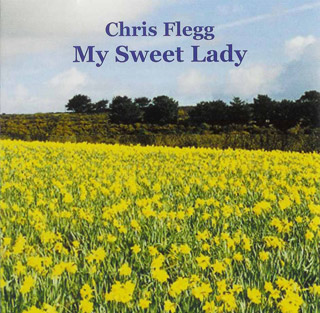 A Hill So High

The Princess & The Huntsman