Gazing At The Stars All Night

All songs written and arranged by Chris Flegg

Gazing at the stars all night started out as an instrumental guitar tune which I still like to play as a relaxing atmospheric piece. The lyrics which came later could be about lifestyle choice, or the ramblings of a would be astronomer, or a bit of both. In my days as a physics student, the idea of leaving the lights of the city for better stargazing made complete sense. If you are going stargazing, taking a special person with makes even better sense. In addition to the 3 minute version of track 1, there is a full length version at track 13 which is closer to my live performance and includes an extra verse and an instrumental break.

French Row takes its name from a street in St Albans, little more than an alley way, with shops and cafes, leading from the Market Place towards the Cathedral. It is where I first started busking for charity at weekends. Every line of this song is based on my experiences of the people and sounds of French Row, the endless parade of busy shoppers, the friends who drop by for conversation and the noise from other musicians, sirens, ringtones and screaming children…..

I’m going home was an instrumental tune first and a song later. At a literal level the words are simply about the joys of going home, but there is a positive message of moving on to a better life. There is a distinctly Brazilian feel to the rhythm and melody and a touch of jazz in the chord work. The instrumental break features the breathy sax playing of Jez Guest with a remarkable solo which is both relaxed and lyrical.

I don't write sad songs anymore began as a reaction to hearing a friend say he was only singing sad songs these days. This made me realise that I am writing happier songs now. This track became a ‘good old country song’ about changing your style and has some slide guitar played on a vintage Fender Telecaster.

The day that we planted the apple tree is another one of my songs that started out as a guitar instrumental and lyrics were added later. The song celebrates the planting of an apple tree in our garden to mark the beginning of a new family, reflecting on how apple trees and children grow up and regenerate. The guitar introduction is unusually long as it goes through the complete song structure before the vocal begins, but that’s how the song evolved and it’s how the live version goes, so why not?

I am what I am tells it like it is; I have been around, done stuff and I have my faults! So what? Who wants a fight? But there are some thoughtful comments on life in general here. We are all under some degree of pressure to conform to how others expect us to behave, some handle it better than others.

Espírito Calmo is an instrumental piece, based loosely on a fragment of song I wrote in the 70's. John McCartney's bass solo on a jazz interpretation of my original song gave me the idea of expanding a fragment of melody into a new composition. This is the most relaxing track in the album, I mean seriously calming; think of a warm night on a beach with the sound of waves ……

Easy living blues is for those who have put in their years at the day job and now just want to give up work and have some good times; “goodbye forever to Mr nine to five”. Join the queue.

Now that I'm a father was written after I became a father for the first time in 2011. This is a life changing moment and deserved a song. Basically the lyric goes through the immediate anxieties of how do we cope and how will life change, but resolves to thinking it’s going to be all right. My daughter, Elizabeth, gets to say something in the introduction.

When I go out begins with a rhyme about remembering things to take with me when I go out. I originally put the rhyme together so that I could go through it when I got to my front door and would never again go out without my season ticket or keys; in practice of course I forget to go through the rhyme. The rest of the song develops around the theme of memory and how we use it and eventually lose it. The guitar backing is unusual in its simplicity, relying on a bass drone to which the melody is added in unison with the vocal part, and a drum beat underlines the guitar interludes with the sound and feel similar to a bodhran. The folky feel of the track is interrupted by a middle section which has a contrasting sound of descending bass line and strings reminiscent of an early Beatles arrangement.

St Alban takes the story of how St Alban was martyred and adds my thoughts on how he is still remember in the City of St Albans where the distinctive blue and white flag of St Alban flies proudly above the cathedral that bears his name.

This is my lullaby for you is my first lullaby; it is sort of soothing but hopefully won’t send you off to sleep before the final track which is the full length version of Gazing at the stars all night. Enjoy! 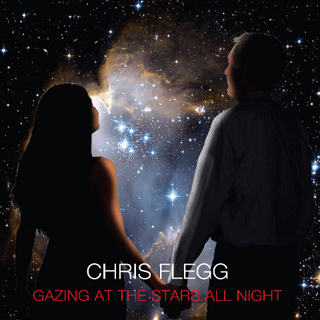 CD including lyrics booklet £10  plus £2 postage and packing

Gazing at the stars all night

Alternatively you can download individual tracks or the full album from iTunes or CDbaby.

“Featured album on "A World of Difference" tonight is Chris Flegg's "Gazing At The Stars All Night". Songs full of warm observational wit, beautifully performed and arranged by an underrated artist who just oozes quality.”

Roger Williams, presenter of A World Of Difference, Mondays at 7 – 10pm on Trent Sound www.trentsound.com

"Easy on the ear with a warm, mellow relaxed vocal.

It's cosy and old fashioned in a good way (though Flegg's lyrics keep a spry contemporary eye open) and it's easy to understand why he has a substantial local following.

Anyone who partial to the music of McTell, Thackray and Garbutt won't be disappointed."

"The performances across the thirteen songs are immaculate"

"The quality of Flegg's guitar playing is indisputable, whether he's picking folky patterns or indulging in some smooth jazz  runs."

"Flegg has learned his trade singing and playing in bars and folk clubs across the land and the skills he's acquired are clear to see."