Why make an album called “My green guitar”? It started out with a trip to Hanks guitar shop to buy strings and there it was, in the back room with all the posh guitars you can’t just try without asking, a second hand dark green Gibson L4A guitar. Half an hour later it was bought and on its way back to the office making it quite an expensive lunch hour. It made its debut busking in French Row, St Albans, played through a battery amp and soon became a favourite instrument because of its easy action and the sweet sound you get from a Gibson that sets it apart from typical dreadnaught style flat top guitars. I understand that this model has been discontinued by Gibson, which makes it all the more special for me.

The album was conceived after noting comments received while busking about how nice it was hearing just instrumentals played simply on solo guitar, things like Cavatina and The Entertainer as well as my own tunes like Chasing Cuckoos. Not all of the tracks on this album are played on the green guitar, a couple of the jazzier numbers such as Round Midnight are played on my Gibson L5 Custom, the classic style of jazz guitar of the type favoured by Wes Montgomery, and which is a very nice guitar but sadly not green. So here it is, a set of tunes recorded with invaluable help, patience and coffee from sound engineer Wes Maebe and Cream Recording Studios in Wembley on the morning of 10th November 2008. Enjoy.

Cavatina (Theme From The Deer Hunter) by Stanley Myers is a gentle and relaxing tune that I often begin with when playing solo guitar. My version is simplified compared to the original but has a few jazz chords thrown in for variation. Classical gas by Mason Williams is a tune I learned from Bill Thacker, a fellow guitarist from my student days and with whom I formed a duo for a while. I have never really paid attention to the original. I like to play this fairly fast as it sounds exciting. Teddy bears’ picnic by John W. Bratton is one of those tunes that always seems to make people smile, perhaps because it instantly recalls childhood days. When busking, this is a favourite with children, and it must be one of the most musically interesting pieces that children learn. Staircase is one of my compositions with a progression of jazz chords that has descending and ascending patterns, hence the name, and a contrasting bluesy middle section. Chasing cuckoos is another of my compositions that has a first part with a ragtime feel and features harmonics that sound like the call of the cuckoo. There is also a middle section that has some tricky runs. This tune reminds me of Porthtowan where I stayed in a chalet where cuckoos could often be seen and heard. Moonlight serenade makes an unusual solo guitar piece, far removed from Glen Miller’s original conception for his big band, and in my arrangement the chords in the middle section make a good finger stretching exercise. Round midnight is another tune that rarely gets played as a guitar solo, but always sounds moody and evocative, possibly because of the slow descending bass line and minor chords; it conjures a vision of a smoky jazz club after hours, though come to think of it, clubs are smoke free these days – and a good thing too!  Her favourite flower is another of my compositions from the 1970s which gets an occasional airing in my folk club set and was previously issued on my “Solo” CD. Danny boy is probably the most unlikely choice for an album of guitar solos, but why not I ask myself, it’s a tune you can whistle all day. Old soldiers is my own composition, previously recorded on my “Solo” album and also as a song titled “Poor Old Soldier” on my “Through the window” album. It suits the green guitar very well. The entertainer is Scott Joplin’s famous rag, a tune far better suited to the piano, but which still sounds good on guitar. This track was recorded in one take at the start of the session (I like to get the tricky stuff out of the way first) and, I hope you will agree, brings the album to an end in style.

You must install Adobe Flash to view this content. 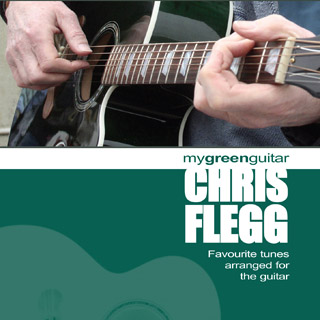