Take a Gibson L5 Custom guitar and put it in the hands of Chris Flegg, and what do you get? Magic.

Flegg's preference is to use light gauge round wound strings plucked with finger nails for a bright clean sound, complimented by the rich sound of bassist John Rees-Jones. St.Albans based Flegg is a stylish jazz guitarist who's also able to switch code onto the folk scene. His sixth album, Her Favourite Flower concentrates on jazz, with a sublime collection of standard covers and three originals.

As a concept, this instrumental album works beautifully, especially so, considering it was all done in a day on the 10 November 2008. With him is classically trained cellist John Rees-Jones whose unobtrusive bass lines provide the perfect backdrop for Flegg to showcase his magical touch. To my ears, the aim here is to create a relaxed and ambient vibe drawing on some of the best known tunes from luminaries like Hoagy Carmichael, George Gershwin and Thelonious Monk.

Cole Porter is the choice to open the tracklisting, which spans 36 minutes and 35 seconds in total.

Night And Day, a massive hit for Bing Crosby is arguably Porter's most popular song, from the musical Gay Divorce, 1932. This energetic song has been mellowed down to fit the overall format and the lightness of touch is beguiling, baring little resemblance to the version by Django Reinhardt which was an early jazz influence for Flegg. The next two I'm Going Home (which Flegg also does with a vocal occasionally) and Cat House are self-penned from years ago. The former has a smooth and laidback Bossa Nova mood, whereas he adds a touch of country to a pacier Cat House, and even though they're totally different stylistically, they juxtapose well.

Stardust, originally a piano piece from 1927, is one of the seminal jazz pieces of the 20th century by Hoagy Carmichael which is done with panache and great sensitivity losing none of the originals charm, with Flegg matching Hoagy's tinkling in every way.

Gershwin brothers' 1938 classic Our Love Is Here to Stay (thought to be George's last work) is a memorable song, mostly remembered from classic flick An American In Paris. Here it retains its jauntiness and playfulness. Probably my favourite jazz song of all-time - Antonio Carlos Jobin's The Girl From Ipanema, popularised by Stan Getz and Astrid Gilberto from gets yet another excellent work out, being superbly arranged for its purpose here, though it does lack the original's sensuality, because it's Getz's sax that makes it a masterpiece. Thelonious Monk's Round Midnight is a real challenge for Flegg as he tries to capture some of the original's staccato piano style using a bluesy solo guitar arrangement, with a gentle and mesmerising effect. There isn't another known solo guitar arrangement of this, so be the first to hear this fabulous version.

As a collection, this an absolute joy to the ears, and a master class for budding guitarist of all ages. 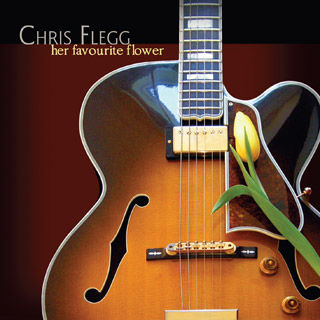